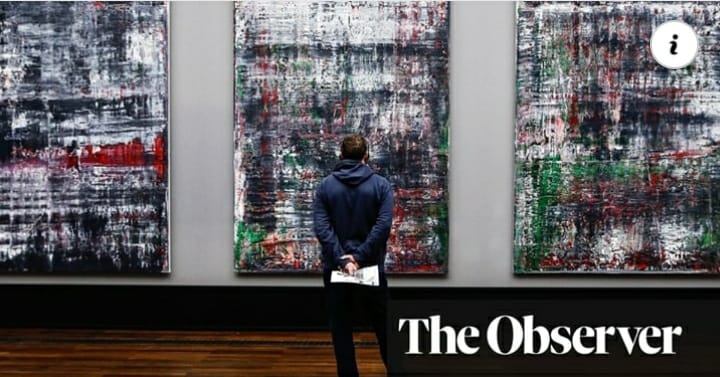 Fans of the German painter Gerhard Richter are expected to flock to Berlin to view 100 works that he has in effect donated in a long-term loan to a new museum of modern art. The works include a series of paintings addressing the Holocaust that he has vowed never to sell.

The donation by the 89-year-old, who is one of the world’s highest-priced living artists, is destined for the Museum der Moderne, which is under construction in the German capital.

The works will be a main attraction at the €450m state-financed museum, designed by the Swiss architecture firm Herzog & de Meuron, next to the Neue Nationalgalerie by Ludwig Mies van der Rohe, off Potsdamer Platz and close to the home of the Berlin Philharmonic designed by Hans Scharoun.

Most significantly the works include Richter’s series Birkenau, the culmination of his decades-long attempt to produce a creative response to the Holocaust, which he has always resisted putting on the international art market, where his works typically command multimillion-euro sums.

The cycle of four 2.6 by 2 metre works was inspired by photographs taken secretly by a Jewish prisoner at the Nazi death camp Auschwitz II-Birkenau in 1944, which depict other prisoners burning corpses. They were the only photographs to be smuggled out of the camp. While the images are blurred, they clearly show camp guards, naked prisoners and corpses strewn on the ground.

The paintings have gone on temporary display at the Alte Nationalgalerie, flanked by four of the original photographs, reflected in a segmented mirror.

It was one of the first art institutes in Berlin to reopen on Tuesday following months of lockdown. Before that, the works were last on display at the Met Breuer in New York, an annexe of the Metropolitan Museum of Art, where they briefly went on show nine days before the city went into lockdown. But the opportunity to see the works in Berlin, where they are scheduled to be on display until October, may also be brief. Rising Covid-19 infection rates may force authorities to close the museum again within a matter of days.

From 2023, the works will be given a temporary home in the Neue Nationalgalerie, which is due to reopen in August after years of renovation, before joining the permanent collection of the Museum der Moderne when it opens, which is unlikely to happen before 2027.

Museum der Moderne will offer a home to a huge store of 20th-century art that has long since grown too large for the Neue Nationalgalerie and much of which has been in storage for years. Richter will be given the rare honour, alongside fellow German artists Rebecca Horn and Joseph Beuys, of having a dedicated presentation space for his works in a state gallery.

It was long speculated that Richter, who was born in 1932 in the eastern city of Dresden, would donate the Birkenau Cycle to Berlin. But the official announcement, which was greeted with excitement in the art world, is nevertheless viewed as a coup for the city, which will now be home to the largest collection of Richter works, alongside Dresden. He has spent much of his working life in Düsseldorf, long an important centre for many German artists, including Georg Baselitz.

Other works that will go to the gallery include Besetztes Haus (Occupied House), 4,900 Farben (4,900 colours) and Strip.

By loaning the works to the Berlin gallery, via a foundation he established to protect them, Richter will prevent them from going abroad.

“It was clear to me that I cannot sell the Birkenau paintings, and neither do I want to,” the artist told the broadcaster Deutschlandfunk (DLF). “Then I had the idea of creating a foundation which would take in additional works.”

He also plans to donate works to other regional galleries around Germany.

Richter’s wife, Sabine Moritz-Richter, told DLF that her husband had been in lengthy negotiation with Berlin before the deal was struck. The collaboration began as a result of the hugely successful Richter retrospective at the Neue Nationalgalerie in 2012 to mark his 80thbirthday, which attracted a record 380,000 visitors. It was also shown at the Tate in London.

“Both nationally and internationally there was huge interest,” Moritz-Richter said. “But for my husband what was for sure was that the Birkenau paintings should stay in Germany.”

Richter added: “The Metropolitan Museum in New York wanted them, but we said: ‘No, they have to stay in Germany. They belong here.’”

Over the past seven years, he had saved works just for his foundation. “I was consciously keeping hold of works or reproducing them,” he said. He said that knowing the works had a secure home in Berlin “is for me a wonderful experience and a fantastic start to a collaboration with Berlin”.

Notoriously media-shy, Richter announced last autumn that he was hanging up his paintbrush. “At some point there has to be an end,” he said in an interview last September. However, critics pointed out that it was not the first time he had made such a claim, only to return to the canvas.

At the official presentation of the Birkenau cycle in Berlin, Germany’s cultural minister Monika Grütters said the donation “sends out an important signal for contemporary museums”. The market value of most of Richter’s works would be beyond the budget of most state-run museums, critics have widely pointed out.”